Due to the fact that most of the low cost airlines do not provide Unaccompanied Minor service to/from international destinations and some of the most important airlines have as well ended its’ unaccompanied minor service after a decline in the number of children flying without an adult, the companion service for minors offered by TU HIJO AL EXTRANJERO provides you with the peace of mind of knowing that your child is in good hands when he/she has to travel alone at the beginning and end of the Study Abroad Programmes, and at Christmas and Easter holidays. 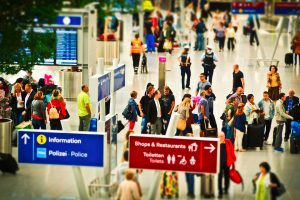 Before each Programme starts, we travel to your home country and collect your child along with other students of our Programmes (always in small groups) at the airport, and supervise his/her safety and well-being from departure, on board and right up to arrival to the host family`s house or to the boarding school. At holiday dates (start and end of terms, Christmas and Easter holidays, start and end of the British and French half term holidays, German Ferien and Irish mid-term breaks) we pick your child up from his/her lodging, drive him/her to the airport and accompany him/her during the flight. Upon arrival at destination, we will hand the child over to the person authorised to collect him/her.

This service cost depends on the price of the plane tickets, the distance from the schools to the airport, as well as the number of children we accompany at the same time. So that we can make this service as economical as possible for parents, we book the plane tickets well in advance of the student joining the school.

The school year in UK is divided into three terms: summer to Christmas, Christmas to Easter, and Easter to summer. Each of these terms is separated by the Christmas and Easter holidays, but in the middle of the term there is also a week or two weeks of holidays. This is what the British schools call “Half Term holidays”.

In Germany, the school year generally begins towards the middle or end of August and is divided into two semesters. Although the dates vary between the Federal States or Länder, summer holidays (Sommerferien) usually last six weeks and Christmas holidays (Weihnachtsferien) two weeks. In addition, students have some autumn holidays (Herbstferien) which are usually one or two weeks at the end of October, in Easter (Osternferien) they usually enjoy one or two weeks and, finally, in Pentecost (Pfingstferien) they have a school break for one or two weeks in May or June.

The school year in Ireland usually starts during the first week of September. Towards the end of October, schools usually close for one week (mid-term break for the first term). Christmas is a two-week holiday. In mid-February schools close again for one week (mid-term break for the second term). The Easter holidays last two weeks. The school year usually ends by the last week of June for primary schools. However, secondary schools usually finish classes by the first week of June so that students can take state exams during the following weeks.

The academic year in Spain runs from the second week in September to third week in June and is made up of three terms, each approximately eleven weeks in duration. The first term runs from September to December with a two week break for the Christmas holidays. The spring term starts after the 6 January festival of Epiphany and runs until Easter (either March or April) with an Easter/spring break of two weeks. The third term finishes mid-June for the summer holidays which last 10 to 11 weeks.

For prices and information on the main airports from which we offer this service please contact TU HIJO AL EXTRANJERO on +34 686189020 or info@tuhijoalextranjero.com

We use cookies to ensure that we give the best user experience on our website. If you continue using this site we will assume that you agree.Ok