Cantons have a large degree of autonomy in regards to their school systems. They choose the structure of their education system, the syllabus and the dates of holidays.

However, the structure of the Swiss education system is roughly the same in all cantons and includes three levels as detailed below as well as the terciary or high education level.

Structure of the Swiss education system 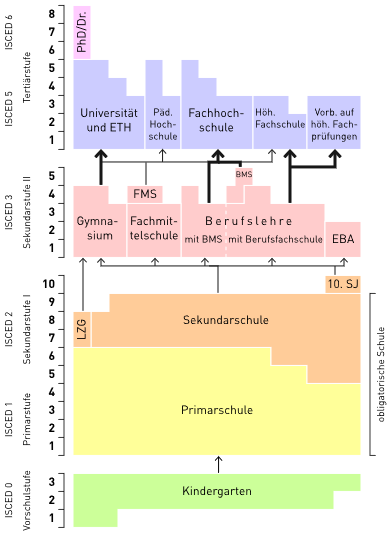 In 6th grade, the last year of primary school, at around age 11–12 years of age, depending on which canton in Switzerland the child goes to school in, there could be a screening exam to decide how to separate the students for secondary school. The preparatory courses for the entrance exam to the Gymnasium begin in August and until October. These courses involve two extra hours of class per week attended by students who voluntarily want to take the exam, which is usually held in the second week of March. If the students take the exam in 6th grade of primary education and achieve access to the Gymnasium, they will take the “long” Gymnasium that lasts for 6 years and provides the highest education that can be taken. The passage to the University or other higher education is practically guaranteed.

Those who cannot pass in Primary have access to the corresponding Secondary level and continue to try to access the Gymnasium in 2nd or 3rd Secondary. If they succeed, they “re-engage” to a “short” Gymnasium that lasts 4 years and that will also allow them to access higher education.

At the end of lower secondary, children begin to choose what they want to study (either academically or vocationally). Certificate/diploma awarded: In some cantons “lower secondary shool leaving certificate”.

The different universities usually dictate their courses in a single language and are governed by the following model: